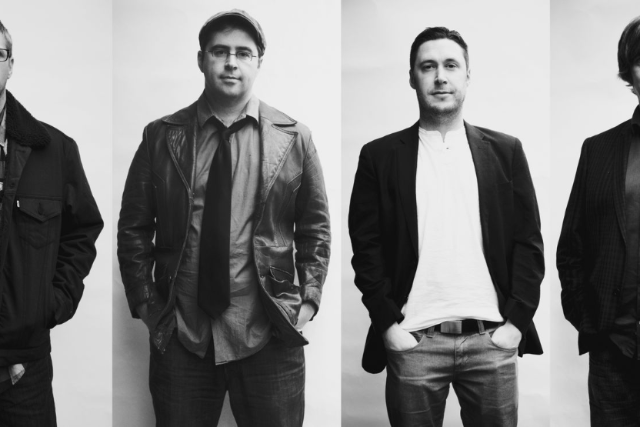 $15.00
Buy Tickets
Fronted by brothers Ben Mish, a skilled piano man with a soulful voice, and Will Mish, a guitar wizard who has earned critical nods for his unfathomable talent and innate sense of melody and blues, and flanked by Irish-born multi-talented rhythm guitarist Ronan O'Mahony, a childhood friend and co-songwriter, and the inimitable stick-man Andrew Cloutier on drums, Left Hand Smoke brews up a blend of neo-soul and rock that is steeped in tradition, yet entirely original and fresh.

Left Hand Smoke's self-titled debut took the West Coast by surprise, earning rave reviews in publications like LA's Radio & Record, and newspapers around the coast. Immediately, things began to happen for the band. Within months of the album's release, four songs off Left Hand Smoke were licensed for network television, one of them, Blues Eyes Shining, eventually ending up on the hit show ER. The song Step Outside (featuring Death Cab for Cutie's Jason McGerr on drums) garnered major airplay from Seattle's AAA format KMTT 103.7 FM The Mountain, vaulting the band from club act to headliner in major performance venues. The album went on to receive many gold stars: album of the year in West Coast Performer Magazine, Top 10 in the Amazon.com rock charts, and the single Step Outside was a top 10 request for 103.7 FM (a live version of the song was featured on the station's popular On the Mountain 6 compilation alongside Tom Waits, Counting Crows, David Gray, and others). Capitalizing on this momentum, the band hit the road, building a loyal following with its now-renowned live show.

As the fanbase grew, the band continued to absorb and explore new music. In addition to the sounds of the Rolling Stones, Bob Dylan, and Van Morrison that came through on their first release, the band updated the sound with an invigorating slice of James Brown and Motown soul. With Andrew Cloutier stepping in on the drums, the band released So Many Faces, Nonsense Parade, and At the Hotel in a musical journey that took them all across the West Coast. Since the release of these records, LHS has continued to collect accolades: they headlined the Backyard Stage at Seattle's famous Bumbershoot Festival; opened for Maroon 5 in arenas during their Northwest leg of the national John Mayer/Maroon 5 tour; the band played with Eddie Vedder, Mike McCready, and Stone Gossard of Pearl Jam during a benefit show in Seattle; on a repeat bill the following year, Mike McCready joined LHS on stage for a cover of Sympathy for the Devil by the Rolling Stones; the LHS song Down the Road was licensed by Pangolin Pictures for use on the Discovery Channel; and the band was voted Seattle's Best Pop/Rock Band by readers of the Seattle Weekly.

The band went on to headline Doe Bay Music Festival and released the album Shine On Everything. The title track was used as the final feature song for an episode of the ABC-TV show Grey's Anatomy in January of 2013, which once again brought the band's music to an international audience. The album Tiny Revolution was also released that year, as the band worked for a second time with Producer/Engineer Ian Sheridan (Bassist and Musical Director for Jason Mraz) and had the album mastered by Barry Corliss. The album Seven followed in 2017.

In 2018, Left Hand Smoke finally brought all of this experience together and recorded a fresh record. The band embraced a new direction, pushing themselves to explore new musical territory. The resulting album, Drugstore Love, combines catchy hooks and soulful melodies with the straight-ahead rock and roll for which LHS has become known. Seven features a fresh sound from a band that has shown their ability to expand in new directions while remaining true to their musical roots. The album was released on December 7th, 2018.