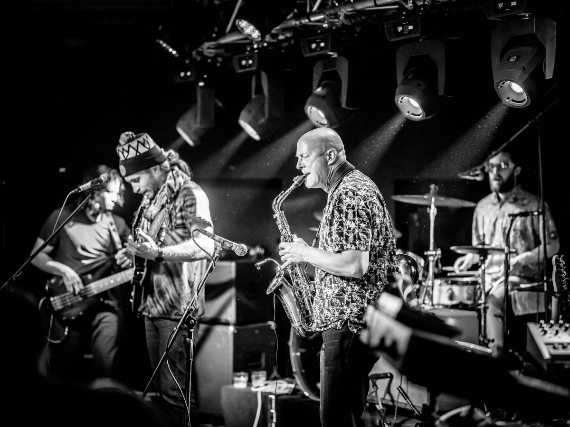 $15.00
Moves Collective are a funk heavy Ameridelic jamband based in Ocean Beach, California. They are turning heads all over the West, sharing stages with musical greats like Leftover Salmon, Hot Buttered Rum, Fruition, Melvin Seals and JGB, Brother's Gow, Marcus Rezak, and many more. Founded in 2014, The Moves quickly developed a reputation for timeless songwriting, high energy shows, exciting collaborations and constant touring (hucking). What could be coined "Ameridelic", Moves Collective's unique music celebrates and is expanding the relationship between the audience and the stage.

The current line up features Tim Norton on guitar, Josh Nathan on drums and synths, Isaac Lopez on bass, and Dad 'Dangerous Paul' Chuey on double saxophone, reeds, and slide guitar. With notable nominations in both 2016 and 2018 - TMC took home an award for the San Diego Music Awards with 'Best Americana act in 2017.

Visit the website to download and listen to music, find tour dates, browse merch, and discover all things Ameridelic.