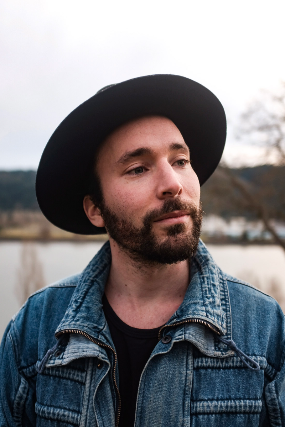 Samuel Eisen - Meyers has been slowly plotting his next work, rearranging the pieces and reimagining how this whole thing works long-term. A lifetime Portland resident, Eisen-Meyers works full time in music and visual art.

Eisen-Meyers cut his musical teeth early and by the age of 13, performing regularly with blues groups in Portland, OR. At 18 he began writing and performing his own original material, while actively touring and supporting other artists and songwriters. With roots in blues, pop, soul and groove music, he developed a fond appreciation for the expansiveness and colors of contemporary songwriting and the freedom of expression that exists in jazz and improvised music. While frequenting the west coast festival and club circuit with bands out of Portland, Seattle and Bellingham, he wrote and recorded three albums between 2009-2014. Now at the ripe young age of 28 he returns with his new band, The Joyful Noise, and his first release since 2015 entitled The Heart of the Soul Pt. 1 – a culmination of years of composing and building what Eisen-Meyers calls, “Joyful Noise.” The Joyful Noise band combines traditional pop music writing formats with high energy vocals, original song instrumentation,  and passionate solo sections. The 5 piece group, made up of  a young cast of Portlands rising stars, delivers a live show that is not to miss.